The Yuengroon Project is located approximately 80km north-east of Bendigo and covers a large area of 687 km2 over the historic northern Wedderburn Goldfield. The tenure extends westwards to cover a large strike continuance (32 kilometres) of the Golden Jacket Fault which shows several important historical gold occurrences. The western area has only been lightly explored and is mostly under shallow cover.

Recorded historical gold production from the Wedderburn field is 140,000 Oz. These finds came mainly from alluvial workings but also included some shallow reef mining down to the water table which occurs at approximately 20 metres depth. Very little modern drilling has occurred to test for depth extensions of the reef systems below the water table.

There are two notable recorded historic mine occurrences along the Golden Jack Fault. The Golden Jacket Mine comprises a shallow small-scale shaft reef mine worked to just 46 metres depth. Total recorded production was 171.7 tonnes of ore which produced 1,385 Oz of gold. Whilst only a small historic working the grade is exceptional, running at an average of 250.1 g/t Au. The Nine Mile Reef is a larger historical mine, which was worked down to 131 metres depth and mined 43,571 tonnes of ore producing 16,236 Oz of gold (average grade 11.6 g/t Au) (Source: Victorian State Government GeoVic database). 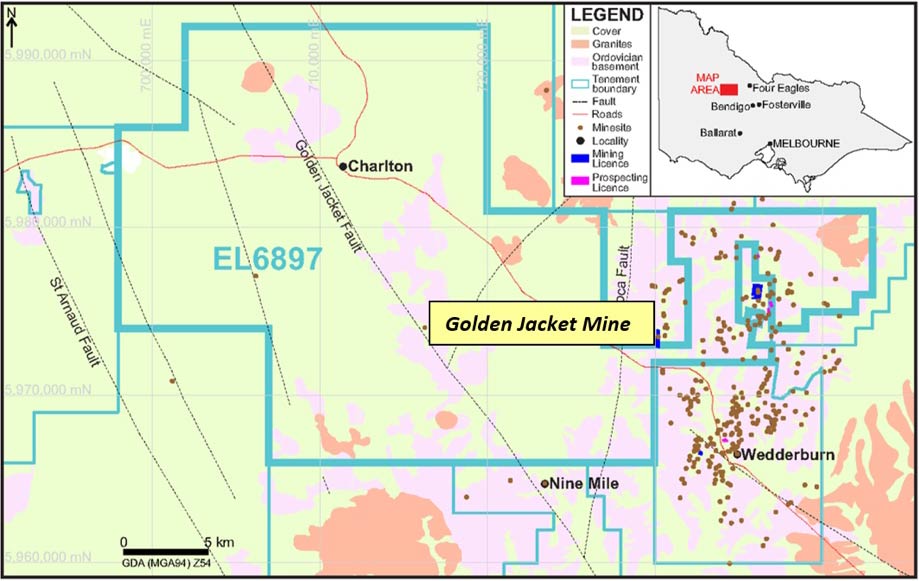