The Mabel Creek Project tenements (EL 6332 & EL 6333) were granted in March 2019 and comprise a total land package of 1489km2 along the prospective eastern margin of the Gawler Craton, coincident with the Mabel Creek Inlier.

The Mabel Creek Inlier is a large block exhibiting variable magnetic intensity and lies to the north of the Mount Woods Inlier which hosts the Prominent Hill Copper-Gold deposit. Importantly, depth of the overlying cover sediments in this region is minimal, with historical drilling recording the top of the prospective basement between 80 metres and 260 metres.

Multiple semi-coincident, magnetic and gravity anomalies, have been identified over both licence areas. These geophysical features have potential to be due to hydrothermal iron-oxide systems. Mineralised examples of these occur along the eastern margin of the Gawler Craton of South Australia and include Olympic Dam, Carrapateena, Prominent Hill and most recently BHP’s latest discovery at Oak Dam. 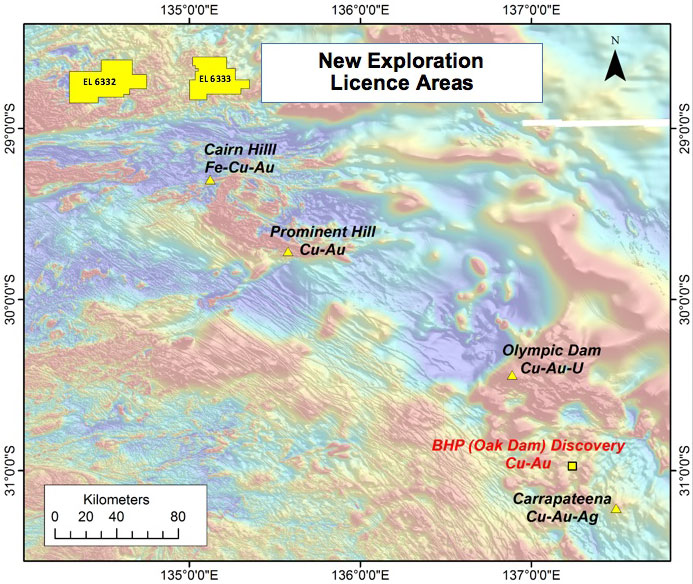 Only minimal IOCG exploration has been undertaken across the project area, however a single hole drilled by BHP in 1992 (NC9202) testing a magnetic anomaly, 13 km south of ELA2018/198 intersected mineralised magnetite-amphibole-pyroxene rock containing significant concentrations of pyrite and pyrrhotite and disseminated chalcopyrite in massive magnetite (ref SA Govt. Records ENV08647).

The hole contained broad zones (not true widths) of anomalous geochemistry including:

Anomalous rare earth elements were also present with values up to 1% Ce and La reported.