The tenement includes the Comet Gold Prospect, where limited RC drilling identified a continuous zone of gold intersections, over at least 150 metres of strike, and remains open to the north, south and at depth (Figure 2). Best historical drill intercepts (not true width; refer to PTR ASX release 18/10/19 for historical drilling details) include:

RC drill testing of the Comet Gold Prospect is scheduled to occur in the first quarter of the 2022 calendar period. The RC drilling will test shoot positions along trend and at both shallower and deeper extensions to that currently known. 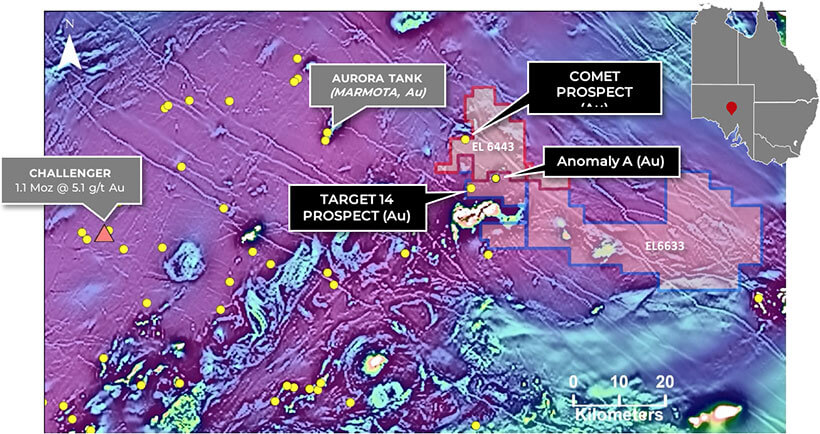 Historical surface geochemical sampling exploration techniques in the region have been impeded by shallow cover strata which masks most of the prospective basement rock geochemical response. To overcome this issue Petratherm has applied a new exploration methodology, where regional scale shallow grid drilling is being undertaken over the tenements to directly sample the top of the in-situ “saprolite” zone clays (deeply weathered basement rock which has been chemically decomposed to clay) below younger transported cover strata (refer to PTR ASX release 28/05/21 for program background). In most areas the top of saprolite zone occurs between 5 and 15 metres depth and shallow drilling is being undertaken using a light weight and cost-effective land cruiser mounted air core drill rig.

At Target 14, 18 angled air core / RC drill holes for a total of 1,061 metres were completed in December 2021. Average hole depth was 60 metres (down hole), with holes at an 80-metre spacing. The prospect is blanketed by 10 to 20 metres of transported cover sediment, before passing into the weathered basement saprolitic profile, with fresher basement rock starting from approximately 40 metres down hole depth. A widespread anomalous gold blanket has been defined across the drill area.

Drill hole 21T14RC05 located on the northern edge of the grid returned the highest level of gold anomalism recording:

The drill intersection forms part of a broader zoned system, which is open to the north-northeast, and at depth to the south-southwest. Figures 2 and 3 show a 3D modelling of Target 14 drilling with transparent gold iso-surfaces used to highlight the blanket of gold anomalism in the saprolite. Figures 3 & 4 show a zoned gold anomalism exists providing a vector towards better mineralisation. An outer yellow shell being between 10-15 ppb Au and the second deeper gold shell ranging from 50 to 100 ppb Au is displayed. Additional follow up holes are planned to evaluate if the gold zone encountered marks the edge of potentially more significant mineralisation. 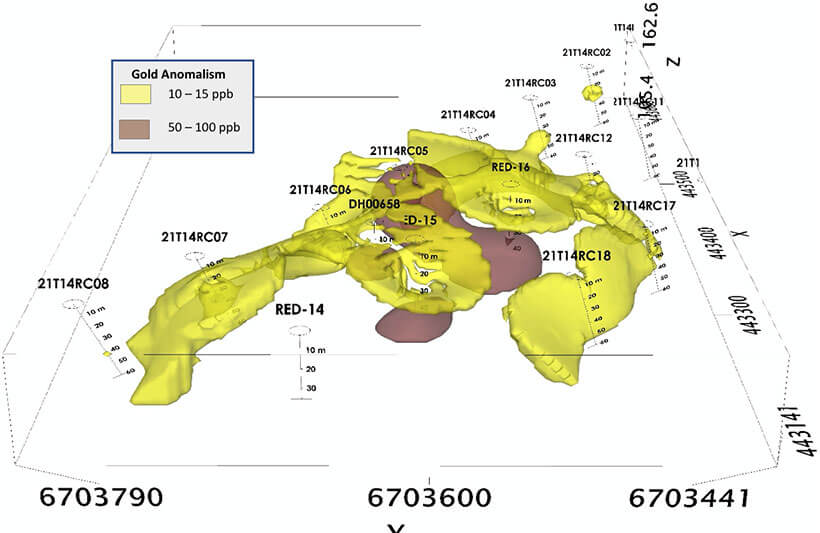 The gold in saprolite anomaly, referred to as “Anomaly A” is shown in Figure 5. In December shallow vertical RAB Infill drilling was completed on a 100-metre spaced grid around the single point gold anomaly (original sample returned 3 metres @17 ppb Au from 18-21 metres) as part of a much larger regional and infill sampling program. The infill RAB sampling has both upgraded and expanded the anomaly returning sample results of:

The multi-point anomaly is coherent, extends over 200 metres and is open along trend. Additional shallow RAB sampling will now be undertaken to map the extent of this anomaly before drill testing. Significant gold occurrences in the region such as the Challenger gold deposit (1.1 Moz @ 5.1g/t) and the recent high-grade Aurora Tank Gold discovery (Figure 1), form discrete, steeply inclined gold shoots. The near surface gold dispersion haloes preserved in the weathered basement at the top of these shoots typically have a small surrounding footprint (i.e. Figure 6). The anomalies encountered at both Target 14 and Anomaly A are consistent with this style of mineralisation and further drill test work is warranted.

The Company will undertake infill shallow RAB drilling at both Target 14 and Prospect A as soon as rig becomes available, which at this stage is likely to be March 2022.